Sunday November 8th, Members of The Glastonbury Rotary Club Marched in the Veteran’s Day Parade that Took Place in Hartford with Music Students From The Maria Sanchez School.
The Students Had an Awesome Experience!

Glastonbury Rotary Club’s Second Annual Back to School Picnic at The Maria Sanchez School
on Saturday September 12, 2015. Lunch for the Students and their Families, with over 600
in Attendance.It was a Great Event.

Working with Hartford Mayor Pedro Segarra and city officials, Rotarians got to work to bring this project to fruition.

The project was titled, “First Day-First Grade”. President Zanlungo commented, “If you can touch the life of a child early on, you can help steer them in the right direction. We want these children to be excited about education.”

The Rotary Club of Glastonbury donated back packs to the approximately 1800 first graders in the Hartford public school system this week. The Rotary Club purchased 1900 back packs with the intention of giving them to the first graders, with the remaining 100 bags to be given to homeless children irrespective of grade. Crayons, pencils, a ruler and note book were provided in each bag.

The Glastonbury Interact Club helped Glastonbury Rotarians stuff the bags with the school supplies last Saturday. Brittany Horton, the President of Interact club commented, “I am excited to have as our first project for the school year such a worthwhile project. We typically serve only our local community but it will be very satisfying to contribute to the needs of the Capitol City.”

The Rotary Clubs of Hartford, Farmington, and West Hartford each contributed to the cost of this project. Those funds were used to acquire the materials inside the backpacks.

Aug 2014 (First Day of School) Glastonbury Rotary Club delivers 100 backpacks to Maria Sanchez School in Hartford, to each first grader.  This was the second year the Maria Sanchez School received backpacks for each first grader, as the result of being Glastonbury’s adopted school. Backpacks and school supplies were funded by Glastonbury Rotary Club and private donors. Each backpack was new and included a notebook, pencils, eraser, sharpener and other fun items. Rotarians who delivered the backpacks were Donna Finocchiaro-chair, Craig Wellman & Scott Doughman-co chairs, Jim Masotti, Brendan Ristiano-club president, Natasha & Mark Doughman. 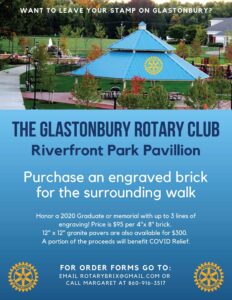 Why Join the Rotary

Hear from some of our club members on why they joined the Rotary. More…